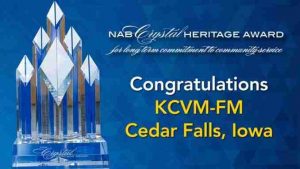 Coloff Media station, 93.5 The Mix – KCVM – is 1 of only 9 stations in the US that has been named a Crystal Heritage Award winning station
by the National Association of Broadcasters.

See the story in the Waterloo Cedar Falls Courier:

Read the press release from the National Association of Broadcasters:

Jim Coloff, station owner and general manager, accepted the award on behalf of the team at 93.5 The Mix.  “We feel that community service is at the heart of what we do at 93.5 The Mix and Coloff Media,” said Coloff.  “From our work with Magical Mix Kids to the many local community events we are involved with, we want to give back to the community that has been so supportive of our local radio station.”

Magical Mix Kids, the 501-c3 charity that was started by KCVM, has taken over 300 families on 20 an all-expenses paid trips to Disney World since 1999.  This October will be the 21st trip, and the group is planning to take 10-12 families once again.

NAB Crystal Radio Award finalists were chosen by a panel of judges representing broadcasting, community service organizations and public relations firms. Finalists were honored and winners announced during NAB Show Express, running through tomorrow and available on demand at nabshowexpress.com.

The National Association of Broadcasters is the premier advocacy association for America’s broadcasters. NAB advances radio and television interests in legislative, regulatory and public affairs. Through advocacy, education and innovation, NAB enables broadcasters to best serve their communities, strengthen their businesses and seize new opportunities in the digital age. Learn more at www.nab.org.

Radio is efficient in delivering your message multiple times every day.

Our stations are everywhere, and support our communities.

Put the power of radio and digital marketing to work for you.